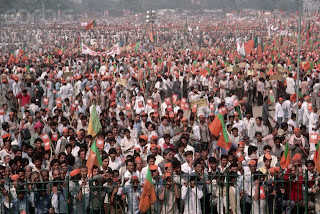 It is high time Indian political parties and political candidates start doing the same. Introduction of professional fundraising would make politicians freer from arm twisting major financers. In fact the answer lies in having a more focused approach towards donations from individuals. After all retail is the key word everywhere, be it a FMCG product, a restaurant chain, a shopping complex or a clothing brand. World over individuals are the biggest contributors to social fundraising .They are the most bankable in terms of continuity and loyalty even in the most difficult of times. Even the great economic turmoil did not deter individual contributions in the US or other parts of the world.
Is any Indian political party or candidate willing to take this route? Time will only tell.
Posted by Shweta Shukla at 10:43 PM 3 comments: 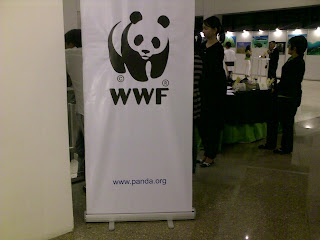 Just happened to visit an event for donors organised by WWF Philippines in Manila's (Makati city)  Green Belt 5 Mall. The interesting part was a very modest vertical banner. The website address mentioned there was http://www.panda.org/. This is all about simplicity, I guess. See the picture above closely for yourself.
Posted by Unknown at 8:55 PM No comments:

As drums beat around the globe, you can catch action at Esprit outlets or on-line. Every drumbeat you create gives a child in need a loving home.

Monthly giving, knowing your donors to keep them for life!

Ashok Mahapatra from UNICEF co-presented with me at SAFRG's " Low Cost Donor Acquisition and Retention" master class. His presentation would be interesting for several fundraisers. The same is available if you click through below.

Understanding your donors to keep them for life

View more presentations from Ashok Mahapatra.
Posted by Unknown at 11:01 PM No comments:

Thank you for your great support. Below is the presentation I made, as promised.

Cheers and have a great time fundraising!

Learn how to acquire and retain donors at low costs 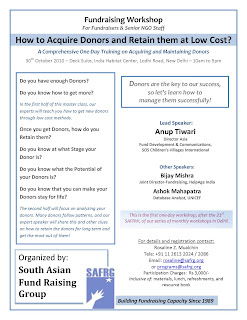 Can a professional agency help you capture individual giving?

Professional agencies have expertise which can be used by voluntary organisations. Yes, they do charge a fee, but your work is done by a professional and you end up spending less time which is again money! says ANUP TIWARI (This article also appeared in the 5th issue of Raisers' Ask)

Caveat: The outsourcing here does not mean that you hire an agency and then forget about everything. On the contrary, it is about a close relationship with the agency working for you. An organisation needs to monitor and support this relationship very closely!

Before we start on the question of how to secure individual donors for your organisation, you need to ask yourselves a basic question, ‘Do individuals give enough donations?’ If you think you are beyond asking yourself this question and have successfully raised money from individuals, then please skip the next paragraph. If you are not in the former category, do read the next paragraph very carefully.

Since you have reached this paragraph, you surely know that individuals are the prime target for donations, irrespective of whether you learnt the fact here or knew it before hand. Just in case your next thoughts are about how one gets individual donors, then fortunately you are at the right place. This is what I am going to talk about now.

Talk to individuals on streets… Can you?
The individuals around you are plenty, especially if you live in India. If you are based in a big city, then a big chunk around you are donation-suspects i.e. they can make donations. But you could not possibly stop them on the streets or go from one household to other asking for donations. The very thought sounds crazy. But isn’t this the way temples in your neighborhood raise money? Well, if they can, why not the voluntary organisations? In fact GreenPeace raise most of their resources in India and other countries by stopping people and asking them to contribute in the streets. For more than eight years CRY has been sending its people to offices and homes to solicit donations. Oxfam, HelpAge, Action Aid and UNICEF have also joined the party recently. This method is called face-to-face fundraising.

And writing letters to individuals
Let me ask you something. How did you send written messages to your friends before the advent of email and SMS? It was through those seemingly pre-historic hand-written letters. If that worked for sending messages, it should work for raising money if done selectively and carefully. I am talking about direct mail appeals. There are a few dos and don’ts and learning process to direct mail that one discovers as one ventures into it.

Tele-facing donors
Do you wonder when you get those pesky telephone calls trying to sell you things from credit card to holidays, that if at all this kind of approach works at all? Well if it did not, no body would have been doing it in first place. That leads us to the point that if it works for credit cards then it should work for soliciting donations. And it does. There are so many organisations that use telephone as a tool for fundraising. In India sending a field executive to complete the donation transaction (and increase the chances of donation) is called tele-facing. Major organistions that use tele-facing include CRY, UNICEF, Plan and Oxfam.

Digital fundraising
A newer tool of fundraising is not surprisingly called New Media. This involves the Internet, email, SMS, on-line advertising, managing search on engines like Google etc. Often, it is also coupled with traditional advertising on television and print. This combination is christened the digital medium of fundraising.

What ever tools you have read about in the paragraphs above are collectively referred to as direct marketing.

Do we need professional help?
Direct marketing involves lot of work. It sure is, fundraising from individuals although the most sustainable source of income needs hard work and some seed capital. Do not get alarmed at the mention of seed capital. Think back and ask yourself if the last new project started by your organisation needed any seed capital? Fundraising is no different.

Will I need an army of people to start raising money from individuals? That depends on the strategy you adopt. If you want to use the entire width of direct marketing tools, then surely you need people.

But do not despair as there are now options in the form of outsourcing. Yes, you read it right, today there are specialist agencies in India who could help you in raising funds and that too very successfully.

A question that you may ask yourself here is if your organisation really needs to outsource. In the Indian scenario if you are a voluntary organisation with limited budget, low on direct marketing expertise and no or small team, then outsourcing surely makes sense for you. The outsourcing here does not mean that you hire an agency and then forget about everything. On the contrary, it is about a close relationship with the agency working for you. An organisation needs to monitor and support this relationship very closely!

So what are the services you would need from these agencies? Well there are categories to it. On the broadest level are agencies that will help you with your individual fundraising strategy. This is important as you may not be able to do everything. Most of the agencies of this type also help yout to outsource some parts of fundraising. On the next level are the agencies that specialise in a particular tool and raise money for you for a fee. The two prominent tools where such agencies exist are face-to-face fundraising and tele-facing.

Professional agencies have expertise which can be used by voluntary organisations. Yes, they do charge a fee, but your work is done by a professional and you may end up spending less time which is again money!. The biggest advantage with certain agencies, especially in tele-facing and face-to-face, is that you pay after you get the donations. So you do not pay if there are no donations. Still not interested?
Posted by Shweta Shukla at 6:35 PM No comments: 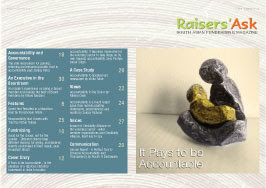 The only fundraising magazine in India has gone digital. Sad, because a magazine is a magazine, of paper and ink. Happy that it does not shut down and digitally reaches the audiences across South Asia, true to its brand claim.

This is an effort to make it go further. Please click the following url to enjoy the magazine

http://raisersask.in/digital/raisers_ask_jul2010.pdf
Posted by Unknown at 6:24 PM No comments:

Dear small but lovely gathering at 21st South Asian Fund Raising Workshop in Agra. Thank you for being such an interactive audience. Below is the presentation as promised.


Direct mail 21st safrw
View more presentations from anuptiwari.
Posted by Unknown at 9:03 AM No comments: